We continue to see prices pull back in Steiner Ranch as the pace of sales sees a slight uptick. The stats for the Steiner Ranch real estate market can be found in text and chart formats below the video.

If you are looking to buy or sell a home in Steiner Ranch, contact me via email or at 512-650-7300. Previous editions of How’s the Market in Steiner Ranch are also available.  If you prefer to read instead of watch, here are the chart and transcript.


Greetings!  I'm Craig Smyser with 1835 Realty.  Welcome to the October 2022 edition of "How's the Market in Steiner Ranch.”  The downward price trend continues to march forward.  Let’s take a look at the numbers.

In September, 16 resale homes closed in Steiner Ranch which was down 27% from September 2021.  It’s also the lowest September in four years.  The median price in September increased year-over-year by 0.7% to $807,500.  The average price of a home increased 1.0% to $875,594. The average price per square foot increased by 11% to $292.10.   As I look at the data for the month, it skews slightly to the entry level home neighborhoods so I think the actual median is probably a bit higher than reflected from just a 16 home sample.  Let’s take a look at the year-to-date numbers.  Keep in mind that with the strength of the spring included, these numbers will overstate where the market is right now.  In the first nine months of 2022, the number of resale homes sold is 141, down 37% from the same time frame last year.  The median price of a home has increased 21% to an even $1,000,000. The average price increased by 21% to $1,146,164.  The average price per square foot increased 21% to $342.69.  As a reminder, in real estate, we measure prices using the median.  Again, the $1 million median for the first nine months of this year is higher than today’s prices.  I would say its around $950,000, give or take.  Because the Steiner housing data jumps around so much from month-to-month, it’s hard to pinpoint exactly the high point we reached in the spring, but I figure we’re down around 15%.  The overall Austin-area is easier to have accurate data because it’s a much larger dataset measuring thousands of homes a month.  Overall, the Austin area is now 13% off the peak.

The number of available resale homes at the end of September was 47, up from 19 last September.  However, it’s down from recent months.  One factor in the recent drop is homes going off the market without selling.  In fact, of the eight homes taken of the market last month, two are being offered now for rent, but the others have just decided not to sell at this point in time.  During September, 15 new listings hit the market which is up 7% from last year.  There were 13 new contracts accepted in September, down 13.3% from last year.

All eyes continue to be on inflation and the Federal Reserve’s response to it.  Mortgage interest rates are twice as high as the start of the year.  For quite a while, I thought we’d likely end the year with prices around where they were at the beginning of the year.  But as I look at the market today, my guess is that prices will be lower at the end of 2022 than they were at the start of 2022.  Again, I will say that I expect the medium and long-term for housing in the Austin area to do well.  But the short term is obviously different.  I don’t know how low prices will go or when we will reach that point.  But, even in past markets far worse than this, there are always buyers and sellers.  If your personal situation is one that means you need to buy or sell soon, touch base with me and let’s talk about your circumstances.

If you have any real estate related questions, please don’t hesitate to call or text me at 512-650-7300 or email me at [email protected].  Thanks for reading “How’s The Market in Steiner Ranch.”

Statistics based upon information from ACTRIS for the periods cited. 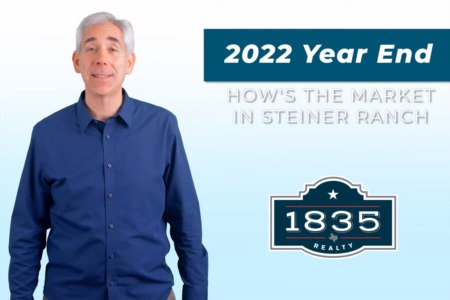 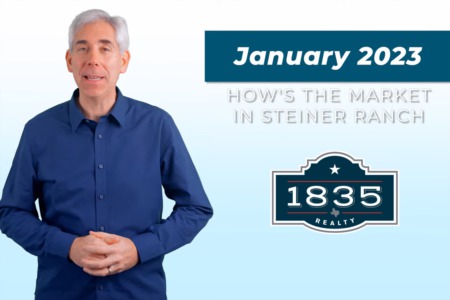 This edition of How's the Market in Steiner Ranch outlines the December sales stats for Steiner Ranch. Now, I typically also recount the year-to-date ...Read More 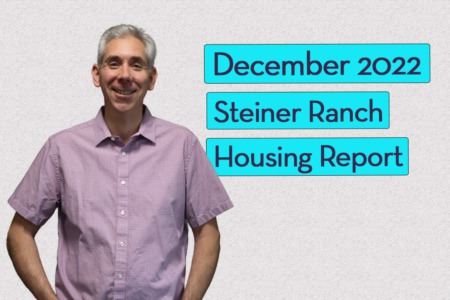