This edition of How's the Market in Steiner Ranch outlines the October sales stats which require an explaination, and I review the stellar year-to-date sales figures.  In addition to the sales stats, I dive into the buying practices of Opendoor and Offerpad.  If you'd prefer to read the report, the transcript can be found below.

If you are looking to buy or sell a home in Steiner Ranch, contact me via email or at 512-650-7300. Previous editions of How’s the Market in Steiner Ranch are also available.  If you prefer to read instead of watch, here are the chart and transcript.

Greetings!  I'm Craig Smyser with 1835 Realty.  Welcome to the November 2021 edition of "How's the Market in Steiner Ranch.”  We’ve got some interesting numbers to review this month, so let’s get started.

In October, 14 resale homes closed in Steiner Ranch which was down 48.1% from October 2020.  The median price increased 1.2% to $627,500.  The average price of a home increased 2.1% to $701,071.  The average price per square foot increased by 24.5% to $253.29.  So what just happened here?  Why am I talking about a 1 or 2% increase in prices but a 25% increase in price per square foot?  I can assure you that prices are up more than a percent or two, but it is just the particular data set this month that makes it looks odd.  In October 2020, the spread of homes sold was broad and encompassed the full neighborhood from entry level to high end.  At that time, up to $500k was entry level.  From there to $800k or so was mid-level.  But its different this year.  10 of the 14 homes that sold were in entry level neighborhoods.  So the distribution really skews it as we compare year over year.  If I were to look at just the entry-level homes that sold last year to this year, it would be more like a 40% increase.  So this month it is just a fluke of the numbers and not an accurate picture.  But if anyone wants to sell me their home for just 1% over what it would have sold for last year, I’ll buy it today.  This is why I like to take a look at the year-to-date numbers because they smooth out these odd months and help us get a broader, longer-term picture of the market.  The number of resale homes sold so far in 2021 is 239, down 14.6% from this time period last year.  A big part of that is fewer homes offered for sale this year – in fact the number of listings during the first 10 months is 282, down 9.6% from last year.  The median price of a home has increased 40.0% to $805,000.  The average price increased by 42.3% to $931,972.  The average price per square foot increased 46.8% to $280.73.  Across Steiner, the October sales ranged from a low of $545,000 to a high of $1,225,000.  The average sales price to list price ratio was 98.4%.  Last month I predicted this stat would fall under 100% for the first time since last November and I was correct.  The market is softer, but still very strong.  And, I think the last couple of weeks are indicating that we might be strengthening a little bit again.

The number of available resale homes at the end of October was 19, up 90.0% from last October. For homes that closed in October, the average days on market was 25, up from 8 last October.  Over the coming month or two, I expect we will see fewer homes available and the days on market will begin to drop again.  If you have been thinking of selling, the next few months will see little competition from other sellers so reach out to me so we can discuss if it is a good time for you to make your move.  In short, the market isn’t as strong as the first part of the year, but it is still a great seller’s market and the prices are still amazing.

One thing I want to dive into is that more than half the homes available for sale in Steiner right now are owned by Opendoor and Offerpad.  These are what are known as iBuyers.  Zillow, which was not a big player in Steiner, has been in the news lately for shutting down this part of their business.  They lost over $1 billion flipping homes and decided to cut their losses.  I have studied Opendoor extensively this year because I realized they were overpaying for houses.  In fact, there was a stretch this summer in which the offers I solicited from them on behalf of my clients were higher than what other buyers were willing to pay.  I figured it would be a short window, and it was, but it was a great opportunity for my clients during that time.  And, yes, for those of you who wondered some of my listings went from my sold sign to no one moving in then an Opendoor sign a few months later, this was why.  Even though Opendoor has not been making any improvements to the homes, they try to sell them at a large markup.  So many of their homes are overpriced and sit for 3 to 5 months on the market (not all of them, but most of them). The question is why were they overpaying?  I believe there are several reasons.  First, they are a relatively new public company so Wall Street wasn’t concerned about profit as much as revenue.  Second, they were competing with Zillow for market share and to try to be the best known name in this market segment.  Third, their algorithms were wrong.  I was able to get quite good at predicting which homes they would overpay and which ones they wouldn’t based on a set of criteria it seemed they were using.  But, frankly, an algorithm can only take you so far in evaluating home prices.   Over the last month or two, Opendoor has lowered the maximum price they will pay for a house in the Austin market, so I think that is another reason you will find fewer of their signs around Steiner.  But the main reason is simply their prices are likely to be less attractive.  From what I can determine, Opendoor’s days of overpaying for houses have come to an end, though I’ll continue to monitor it.

Of course, if you have any real estate related questions, please don’t hesitate to call me at 512-650-7300 or email me at [email protected] Thanks for reading “How’s The Market in Steiner Ranch.”

Statistics based upon information from ACTRIS for the periods cited.

Prices continue to rise in Steiner Ranch and the median price is now over $1 million. In this month's installment of How's the Market in Steiner ...Read More 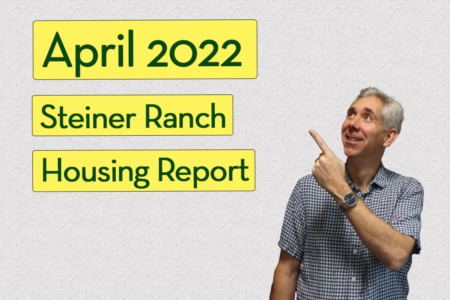 The ​median price of a home in Steiner Ranch in March was the highest I've seen, but I don't think it's a true representation of the full ...Read More 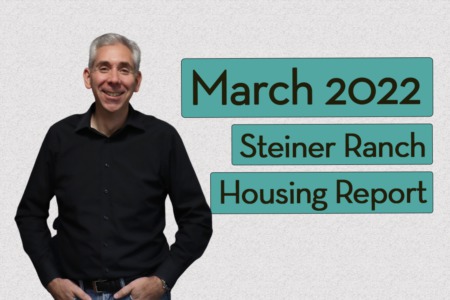 The Steiner real estate market continues to rapidly move higher.  Watch this month's installment of "How's the Market in Steiner Ranch," to get ...Read More