Let's talk about the hand signs ​used at various Texas colleges in this episode of Discover Austin. Do you know them all?

Knowing the hand signs used by colleges in Texas is an important bit of knowledge around here.  Since it all started at Texas A&M, let’s begin there.  Prior to a game against TCU in 1930, alumnus Pinkie Downs was addressing the students during Yell Practice.  He said “What are we going to do those Horned Frogs?”  Then answered his own question with “Gig ‘em Aggies” while giving a thumbs up.  Now a gig is a sharp hunting tool.  It stuck and soon students were using it during the games and around campus.  Over the years, other Texas schools decided they wanted their own hand sign, too.

Hook ‘em Horns is the slogan at the University of Texas right here in Austin.  The hand sign, which of course resembles a Longhorn, was first used in 1955.  I’d argue that the UT hand sign is the most recognizable of them all.  Dating back to the 60s, fans from other schools would simply turn the horns down as a dig against UT.  That’s still a popular thing for opposing teams and rivals.

Heading up to Waco, the Baylor Bears say Sic ‘Em along with a Bear claw.  Originally used in 1960 and officially sanctioned in 1972, proper use is “Heyyyyyyy, Sic ‘Em Bears.”

The Red Raiders at Texas Tech University in Lubbock use a two handed sign when they sport the Guns Up.  It was first used in 1971 when a Tech alumn, who lived in Austin, got tired of seeing Hook ‘Em Horns all over the place and decided to create a hand sign for his alma mater.  In addition to the Guns Up sign, the slogan Wreck ‘Em is used.

The University of Houston Cougars originally used a V for Victory hand sign.  But in 1953, the Cougars were playing their first football game against UT.  Houston was bringing its cougar, Shasta, to Austin, but along the way, one of her claws got severed.  UT fans mocked the situation by bending down their ring finger to mimic the injury.  Keep in mind, this was two years before Hook ‘Em came to be.  Anyway, the Cougars didn’t adopt this until 1968 when the two teams played for just the second time.  Remembering the taunt, Houston fans used the hand sign during the game, which ended in a tie.  From then on, the injured Cougar paw came to be widely used.

Heading up to Dallas Fort Worth, we’ll start with Southern Methodist University.  The SMU mustangs use ‘Pony Ears.’  Adopted by fans around 1974, it’s a peace symbol with the two finger ever so slightly bent.  I say ever so slightly, because if you bend them too far, you’ve now driven across town to Texas Christian University.  TCU’s hand symbol is a peace sign with the fingers curled to symbolize the horns of their mascot, the horned frog, which, by the way, is not a frog, but a lizard.

Of course, other colleges across the state have them as well.  Without providing their history, the University of North Texas has the Eagle Claw.  The Texas State University Bobcats use two hands to make their sign.  The right hand is the bobcat paw while the left hand forms the state of Texas with the two fingers pointing to San Marcos.  Now this is also the hand sign for the Stephen F. Austin Lumberjacks, which often uses two hands and is acceptable this way or this way.

Finally, right here in Central Texas, the Austin Community College’s mascot is the River Bat.  It took me a while to find it, but apparently their hand signal is this.  I humbly propose a change to this.

Whether you Gig ‘Em, Hook ‘Em, Sic ‘Em, or Wreck Em.  Whether you’re a cougar, a pony, a horned frog, an eagle, a bobcat, a lumberjack, or a river bat, your hand sign is a great way to show other Texans where your college allegiance lies. 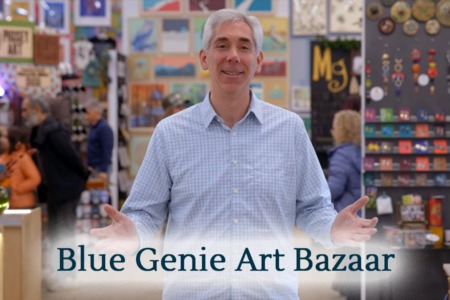 Each year around mid-November, a unique shopping experience opens to fulfil your gift-giving needs.  We’re going to visit The Blue Genie ...Read More